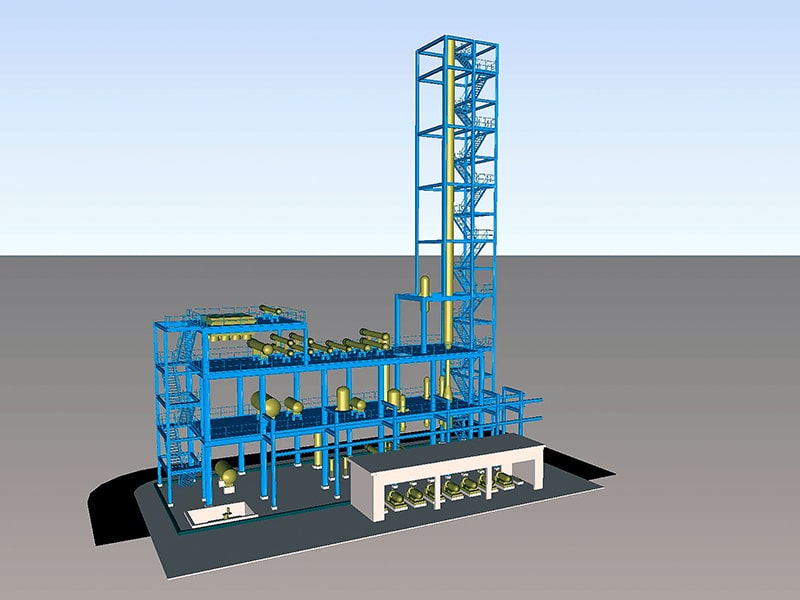 As of the end of quarter I 2016, the proposals from global licensing companies of DME production process have been studied. JSC NIAP performed pre-design study having issued the document “Justification of Investments into Construction of Dimethyl Ether Production Plant with Capacity 20,000 TPY”. The document “Environmental Impact Assessment” is developed.

Public hearings were arranged and held in the administration of municipal entity Shchekino district, positive decision №57/589 dd. 22.10.2013 on possibility of new production plant location is obtained. Engineering and environmental and hydrometeorological surveys, as well as geological and geodetic surveys are executed at the site of project construction.

The main part of the contract with ThyssenKrupp Uhde Engineering Services GmbH for purchase of license, basic design development is performed (except for rendering services on the personnel training). The contract for supply of licensed equipment is concluded with this company. The activity starting date under the contract with ThyssenKrupp Uhde occurred on 20.04.2016 after settlement of the issue on credit financing from GPB Bank (SC).

Based on the licensor’s data sheets the work is being performed on ordering the equipment and studying the technical proposals from prospective equipment suppliers. In February-March, 2016, the bidding took place for selection of the main process equipment suppliers on the basis of the licensor’s data sheets. Requisitions for supply of auxiliary equipment are prepared, until the end of May 2016 it is planned to select the suppliers and sign the contracts for supply of the main and auxiliary equipment.

The Minutes №5 dd. 20.01.2016 of the meeting of Cross-Agency Commission on efficient allocation of productive powers on the territory of Tula region approved implementation of the investment project of construction of DME production plant with capacity 20,000 TPY.

Until the end of May, 2016 it is planned to obtain the permit for construction and beginning from June, 2016 – to start preparation of site for construction of dimethyl ether production plant.

Dimethyl ether offers the formulator a wide spectrum of possibilities: the solvency power towards polymers, the miscibility with other solvents and propellants and its water miscibility are welcome advantages.

The main advantage of dimethyl ether is its solvency power therefore it is widely used as a propellant for paint aerosols and enhances product properties.

Dimethyl ether is one of the most widespread propellants in production of polyurethane construction foams, since it enables manufacturers to complete two tasks at the same time: both propellant and solvent are injected at the same time.

Due to high propagation factor the use of dimethyl ether in production of extruded polystyrene (XPS) allows to produce boards with the specified parameters at lower prime cost.

Dimethyl ether is increasingly used as a part of substances for local anaesthesia (numbing for treatment of athletic injuries), as a cosmetic agent to remove warts and as an extractant of active substances of plant and animal feedstock.

The method comprises contacting of skins to be defatted and/or desiccated with one or more solvents. Dimethyl ether is used as a solvent. Lamb, cow, goat or pig skins are subject to defatting and/or desiccation. The technical result is to ensure treatment efficiency and improve environmental safety of the process.

Dimethyl ether mixed with ammonia (mass ratio 40%/60%) can be used in freezing equipment. Coolant is designated as R723.

Application of this mixture as a coolant increases cooling capacity of refrigerating station. Limited solubility of mineral oil in R723 and possibility of working with copper (corrosion mitigation) allow to create a small-capacity station more effective than those with currently existing coolants.

With replacing 40% ammonia by DME in the existing refrigerating stations it is possible to obtain reduction of ammonia consumption by the station without loss of efficiency.